Cultivating Students’ Familiarity with the World

“But no matter what we may say, the customs and practices of life in society sweep us along” – Montaigne had it absolutely right in the 16th century when he recognized the limiting effects of our little, cultural cubes. We’re swept along, sucked into a daily life of cultural sentiments that shape our physiques as well as our minds, no matter whether our national unit stretches from St. Petersburg to Vladivostok, from Seattle to Miami, or from Skagen to Gedser. We do things our way and do not always have sufficient appreciation for how they are done elsewhere.

Fortunately, education has also recognized this long ago. The value of getting out there, getting your feet wet, your hands dirty, your nose stimulated, your cultural and educational framework altered, is precisely the simple truth that underwrites the many study abroad opportunities at universities across the planet and certainly at Washington State University.

And it is important with a variety of such opportunities. Our customers are highly and differently scheduled; what is possible for one is not for the other but for all an experience abroad should be a must. The WSU Honors College is dedicated to global perspectives because of that global world we invariably will and must interact with. A good third or more of our students have an experience abroad, from yearlong immersions on exchange programs to two-week long faculty-led programs bringing students into intense, close contact with a foreign culture, its history, its language, its politics. It is of the utmost importance for the individual mind to have this experience; it is of the utmost importance for any nation to educate its young with a sense of global respect. 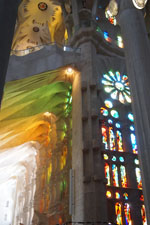 This summer I embarked with eight students on a 15 day trip through Northern Spain from Barcelona to Madrid, through the Basque country with a stop in Burgos: ‘Art and Culture in Contemporary Spain: the Catalans, the Basque, the Madrilenians.’ Spain is not just Spain but regional cultures, often with their own language. With people fiercely devoted to their local culture, perhaps, in opposition to the governing culture of Madrid or outright demanding independence as is the case for many in Catalonia and the Basque country.

Spain is a country mired in the financial crisis but the suffering isn’t entirely visible as you travel through although we certainly heard about it – which I shall return to. 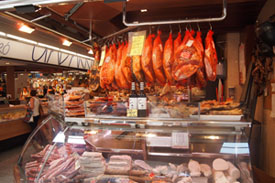 But first Barcelona. Coming from Pullman the culture shock is immense. Its 1.6 million people excluding tourists, seemingly all congregating downtown, a cacophony of sound, image, movement, foods and outfits. At the end of the mile long pedestrian street, Las Ramblas, Columbus on his statue gazes over the Mediterranean. Las Ramblas skirts the old, medieval town with a Roman past, and on it and along it you can purchase everything from puppies to postcards and shop all you need fresh for dinner in the marvelous La Boqueria indoor market. On my last visit to Barcelona an old man had decided to promenade all naked up and down Las Ramblas to much giddy excitement for tourists, but indifference from the police. We didn’t see him this time, though. 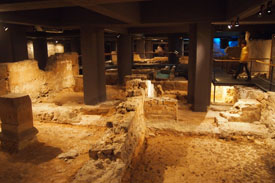 The City Museum relates the fascinating history of Barcelona all the way back to the little Roman settlement, Barcino. You can walk around the ruins in the Museum’s basement section and see how they lived back then, how they did laundry using urine trickling down channels from the street level supplied by a generous public. Urine contains ammonia, a whitening agent. Stunningly, one female student actually had first-hand experience doing her laundry this way. Just make sure you rinse well, she said. Never underestimate the fearless research and entrepreneurial skills of Honors students! Roman city architecture accommodated the need for fresh laundry. Numerous artifacts including inscriptions and busts of well-to-do citizens are exhibited as well. Who were those guys? 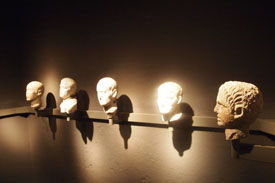 The outstanding Museu Picasso accounts for the early period of this seminal artist’s life. It is clear that the kaleidoscopic, open and inviting nature of Barcelona’s live-and-let-live attitude must have had a profound influence on this man’s creativity. In Madrid we ended the trip in Museo Reina Sophia on a somber note, in silent awe in front of Guernica, Picasso’s energetic monument to callous, human destruction, 1937.

A definite highlight was seeing La Sagrada Familia, Antonio Gaudi’s unfinished masterpiece of a cathedral. They have been building it since 1882 and project a finish in 30 to 80 years’ time; they are not in a hurry. We spent an hour and twenty minutes waiting in line encircling the cathedral; good time actually to relax in the heat absorbing city impressions as well as views of the project from every angle. Despite it being only the second day of jetlag all students were troopers. Inside it is absolutely presentable, an odd work of art, half football stadium, half Avatar. Jesus floating through space under a lit baldachin’s warm yellow colors like a mid-summer celebration. Soft light emerging everywhere from angular, hidden spaces. We surrender to Gaudi’s aesthetics, not necessarily to his religion. 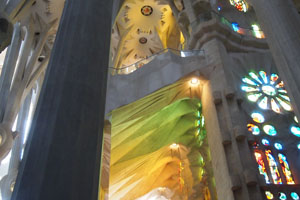 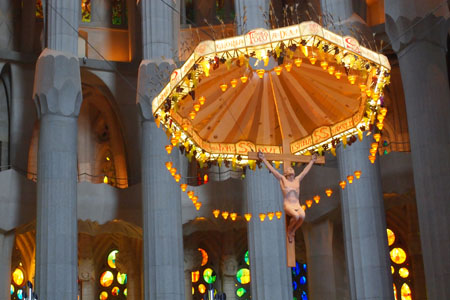 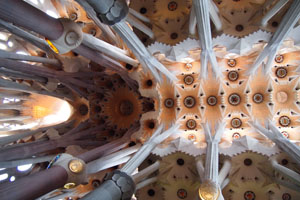 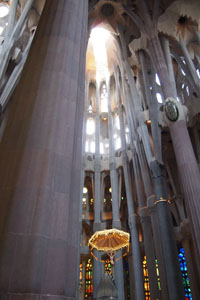 After La Sagrada we found a little café for some lunch. It turned out to be one of those places where not only the food is great, plentiful, and inexpensive, but the waiter understood how to fully live up to his responsibilities as a charming host. He engaged the students in Castillian, i.e., Spanish, and not the local, elusive Catalan. Just what the lady Cougs needed. Cultural barriers overcome. 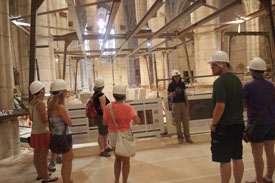 The train to Vitoria-Gasteiz, the capital of the Basque region, took 4 ½ hours. Train travel allows you to catch up. You sink into your seat with your provisions and let the world glide by. Or you write your journal or bond with friends playing cards; or get a nap; or ponder distant ruins; or all of the above. In Vitoria we wandered the streets and toured the old medieval cathedral which is being salvaged and renovated. Well-equipped in hard-hats we followed our guide up and down galleries, inside and out. We learned how the past crumbles if it isn’t kept up. There’s something about hard hats facilitating learning. Students really connected with this experience, they told me. Perhaps, it makes them listen more intently knowing that something might fall on their heads at any given moment. We should incorporate hard hats in courses on campus; or renovate more.

In Vitoria’s museum of modern art, ARTIUM, we got to work out on bikes with Miro on the wall. New concept, whether good for Miro or beneficial to our physiques, but probably necessary considering the sumptuous buffet breakfast at our, to my liking, too comfortable hotel. 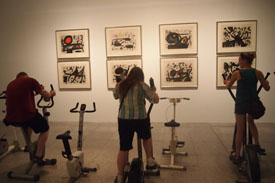 The best hotels are the ones with free wi-fi in the rooms! A pain it is if you can only get it in the lobby. And the first half hour the internet is free on the lobby computers, then you have to pay. Shocking! Scandalous! Isolation!!

On the other hand, the good thing is, you can always find students in the hotel lobby. Maybe for future programs I should rank wi-fi above breakfast as I plan accommodations. 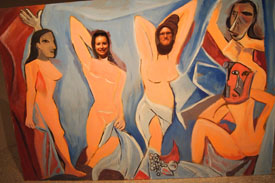 The scourge of modern education, the smart phone, increasingly spreads its venom through human communication. Once I was sitting in the bullring in Sevilla with students observing the bull flipping over on its side the heavily padded horse and its picador, the banderilleros scrambling to save the man. Behind me a student was texting in deep concentration. “What are you texting,” I asked. “Oh, I’m telling them at home that I’m at a bullfight and I don’t know what to think about it.” The situation is deeply disturbing on several levels. Firstly, knowing what to think of something demands full attention to the something. Secondly, getting a useful sense of what is foreign necessitates us extricating ourselves from the home-front which essentially cannot help us anyway. Thirdly, the texter probably didn’t have time to capitalize the “I” and so on.

The smart phone is the wandering cube. The handy, physical embodiment of cultural self-centeredness. The nifty metaphor for not having to make up one’s mind on one’s own. Travel 15 days in Spain and absorb 80% of what you see. Bring your smartphone and you’re lucky to retain 35%. O tempora, o mores! 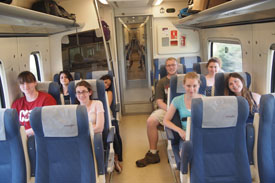 In Burgos we arrived at the grand show that this ancient capital of Spain offers: the contrast between religious devotion in existential choice and excessive architecture and, on the other hand, an entirely different explication of the human. The Burgos cathedral dates back to 1221 and is rightfully famous for its size and opulent interior. We toured for two and a half hours and it wasn’t enough. But just across the Arlanzon river the same Burgos hosts one of Europe’s finest museums of evolution detailing the scientific study of evolution and in particular the findings from the Atapuerca site with its rich fossil record. It’s as if the museum in size and contemporary architecture tries to rival the historical weight of the cathedral across the river.

The danger here is that the students aren’t too enthusiastic about the museum of evolution. We know that, we took the class, they said. Somewhere deep down they probably don’t want to be reminded which is understandable. Although, why would a hairy humanoid be more disturbing than a not-entirely human suffering on a cross? Perhaps, it is nothing more than a matter of cultural conditioning and that the former has only had few years to get connected. 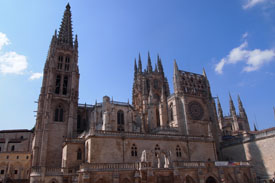 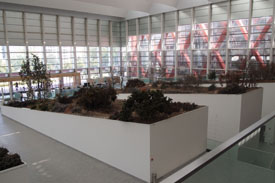 Four kilometers upriver we visited the active monastery, Cartuja de Miraflores, where 23 monks live in absolute silence and isolation, 24/7, contemplating the mystery of life, as rendered through the Christian tradition, I suppose. We didn’t get to interview them.  Once a year they go on a picnic together to the mountains, the guide told us. Perhaps, encountering the depictions of their ancestors downriver would be an enlightening experience. To us, it was a mindboggling contrast, but the stroll along the river most pleasant in the central Spanish summer. 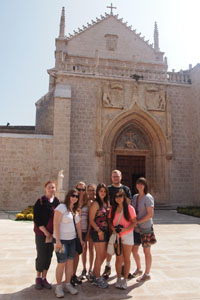 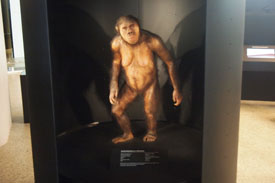 Our tour of Northern Spain ended in Madrid. This wonderful capital has a distinguished air about it but at the same time it is a city teeming with the conflicts and delights of contemporary life. The best ice cream, the freshest fish (brought in every night), the most stores with air-cured, whole, fully hoofed, hams hanging down from ceilings. Order a café Americano, solo, or cortado, and internalize the multitude of traffic.

We visited Museo del Prado which in regards to classical Spanish art probably is more opulent than the Burgos cathedral, certainly as a depiction of people and life in the past. We could have come back here many more days we all agreed. Despite its more than 2000 rooms the Royal Palace seemed empty and of dubious relevance in a very democratic Spain. But the armory of more than twenty life-size, medieval knights on horseback, in full armor, scored high on everybody’s list!

The last night we attended a vibrant Flamenco theatre with music and dance just around the corner from Plaza del Sol where at the same time people were protesting the injustice of having to pay for the excesses of the financial industry and bad, shortsighted, complacent, political planning. Apparently, tear gas had drifted and arrests been made. We joyfully exited the theatre with the engaging gypsy rhythms still ringing in our ears and headed back to the hotel neighborhood for a final dinner together. Never saw or heard a thing; Madrid is a big city.

So is the world, of course, but every time we make the effort to see it, it gets a little more familiar. 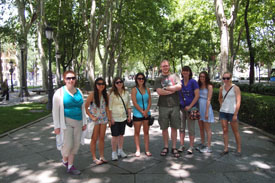 All photos were taken by Kim Andersen.