From Vikings to Open-Faced Sandwiches: 15 Days From Oslo to Copenhagen and Stockholm

Rachel Wanty is a double major in Neuroscience and Spanish who spent four months of 2010 studying in Guayaquil, Ecuador. She added her major in Spanish upon her return to WSU because of her experiences in Ecuador. Her favorite experience was living with a host family. She describes them as wonderful people who were so willing to share their home, culture, and country with her. Rachel will attend Veterinary School after finishing her degrees at WSU, so to accommodate her love of animals she volunteered at a zoo while she was in Ecuador.

Curtis Walton is a Mechanical Engineering student who spent six weeks during Summer 2010 in Braunschweig, Germany. The part he most enjoyed was visiting various cities around Germany, such as Hamburg and Berlin, as well as different German icons, such as the Volkswagen plant in Wolfsburg. His immersion in the program also greatly improved his language skills, from conversations with locals to classroom discussions with the 50+ international students in the Braunschweig program. The experience for him was life-changing, helping him to obtain a greater state of independence while also gaining a more global perspective.

Hannah Visscher is a Speech and Hearing Science major with a Spanish minor who spent six weeks studying with ISA in Salamanca, Spain in the summer of 2010. She took Spanish culture and language courses and enjoyed learning about the Spanish culture while living with a host family. Although she did a lot of traveling while she was there, her favorite part of the experience was getting to explore the city of Salamanca and getting to know the people who live there. She even got to participate in the Arts Festival! Hannah says that studying abroad has made her more independent and confident in her own abilities. The language and skills she learned there will be invaluable in the future.

Andrew Whitaker (’09) spent 12 months in China on a National Security Education-Boren scholarship. The most memorable experience for him was the close friendship he developed with his Chinese roommate – despite the vast cultural differences between them. Andrew is intrigued by the challenge of learning a second language and continues to practice his Chinese while taking classes this year. His favorite part of traveling throughout that vast country was visiting the small villages in the rural areas where someone would always “take him under their wing.”

Sara Crumb (’09) is a double major in genetics and Spanish who spent an entire year studying in Granada, Spain. After a two-week intensive Spanish course, Sara was ready to take all of her coursework in Spanish. She lived with “the best host family in all of Granada” and quickly became part of that extended family. She also enjoyed meeting students from many areas in the United States who were also participating in this program and traveling to many countries in Europe. Her career goal is to conduct research on genetic disorders. Her Honors Thesis will involve public opinion on stem cell research.

Ashley Loyd (’07) has actually participated in three summer international education experiences – a service learning activity in the Dominican Republic through the International Student Volunteer Program, and two College of Business summer school programs in China and Thailand. Ashley’s advice to new students is “don’t conform to staying inside the box. Be willing to stay an additional semester or use summer opportunities to study abroad.”

Brian Carlton (’09) spent two semesters studying at the University of Santiago, Chile where he took courses in Spanish and History and played in two local bands. Brian is a civil engineering major who has always wanted to be fluent in a second language. He hopes to return to Santiago for an internship in summer 2008. According to Brian, studying abroad opens your perspective and broadens your horizons. It helps develop the “whole person.” His family travelled to visit him while he was abroad.

Jordan Bush(’07) is a College of Business graduate who received the National Security Education-Boren scholarship to spend two semesters studying in Harbin, China. He collected research for his Honors thesis which focused on corporate success factors in China and the United States. Although it was difficult to gather his data in the remote area of Harbin, he has no regrets about spending two semesters studying in China. Jordan has three years after graduation to complete the service requirement associated with this federal scholarship. 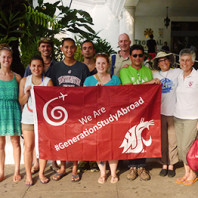 Rachel Wanty with a baby Tapir at a zoo in Ecuador 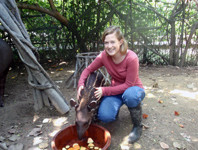 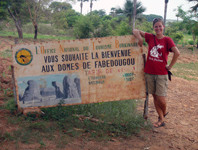