Top thesis advisors and outstanding teaching faculty are celebrated each year by the Honors College. In addition, numerous Honors faculty members receive awards and recognition for their outstanding contributions to education and research at WSU.

Dr. Dick Gomulkiewicz, an Honors Faculty Fellow and Professor in WSU’s School of Biological Sciences has published a 2021 paper entitled “Evading resistance to gene drives” in the prominent journal Genetics.  The paper was coauthored by current Honors College student Micki Thies along with James Bull, and the research was supported by funding from Professor Gomulkiewicz’s recent Honors Distinguished Professorship. We are also pleased to note that Dr. Gomulkiewicz is himself an alumnus of WSU Honors.

The French author Michel de Montaigne is widely regarded as the founder and greatest practitioner of the personal essay. A member of the minor aristocracy, he worked as a judicial investigator, served as mayor of Bordeaux, and sought to bring stability to his war-torn country during the latter half of the sixteenth century. He is best known today, however, as the author of the Essays, a vast collection of meditations on topics ranging from love and sexuality to freedom, learning, doubt, self-scrutiny, and peace of mind. Read more here >>

Annie Lampman’s “Sins of the Bees:”

WSU Honors College Professor Annie Lampman’s debut literary-thriller novel Sins of the Bees (Sept 1, 2020 Pegasus/Simon & Schuster) blends the majesty and mystery of Where the Crawdads Sing with the character explorations of The Girls to present the lives of two very different women and their tumultuous interactions with a dangerous Y2K doomsday cult. Lampman will do a short reading from Sins of the Bees and then answer questions from viewers and students. Click here to view advance praise of Sins of the Bees.

Part spiritual quest, part survival tale, DJ Lee’s memoir follows a difficult path through memory, meaning, and some of the world’s most rugged landscape. When her friend vanishes in the vast Selway-Bitterroot Wilderness of Idaho and Montana, Lee travels there to seek answers. The journey unexpectedly ends her 15-year search to uncover her family’s troubled history in this remote place. During these difficult treks, Lee struggles with wild animal encounters, dangerous river crossings, bush plane flights in fog, and strange characters who have come to the mountains to seek or hide. But what she learns about the life cycles of salmon and wolverine, the regenerative role of fire, and Nimíipuu land practices helps her come to terms with the land, her family past, and her friend’s disappearance. Throughout, Lee engages with dreams and spirits, history and memory, and the nature of narrative itself. The book’s 28 photographs provide a complementary visual story. For additional information click here.

The award will be presented at Experimental Biology 2019, a conference that brings together five national scientific societies, and $100,000 over two years to be used in support of Meier’s research. The awards ceremony will occur on April 6 at the Orange County Convention Center in Orlando, Florida. Read more at WSU Insider

Ray Quock is the recipient of the E. Leong Way Emeritus Travel Award from the American Society for Pharmacology and Experimental Therapeutics (ASPET). He will receive the award at the 2019 Experimental Biology Meeting, Orlando, FL, April 6-9, 2019.

Quock is a professor in the Department of Psychology at WSU and teaches Honors 390 for the Honors College. He is a former Honors Distinguished Professor, and a current Honors Faculty Fellow.

During the spring 2012 Honors Commencement Banquet, awards were presented to faculty who served as outstanding Honors thesis advisors. These individuals were nominated by their students for being helpful, knowledgeable, and supportive throughout the thesis process.

Recipients of the 2012 Thesis Advisor Awards are:

Additional awards were presented to students and faculty at the 2012 Commencement Banquet.

The Award is given to non-tenure track faculty members who demonstrate an exceptional commitment to teaching and have made significant contributions to teaching and learning at WSU, says Chuck Munson, chair of the WSU Teaching Academy. More>> 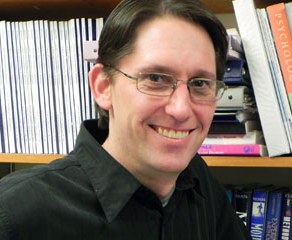 From WSU NewsThe U.S. government estimates that nearly 20 million Americans suffer from alcoholism. About one in four receives treatment for this disabling addictive disorder, but nearly half of those treated will experience a relapse within three months.

Why it is so hard to stop using alcohol and what can be done to help those struggling to quit are questions at the heart of Washington State University researcher Brendan Walker’s work.

Walker, an assistant professor and neuroscientist in the Department of Psychology, has been awarded a five-year, $1.65 million grant from the National Institute on Alcohol Abuse and Alcoholism to study how chronic exposure to alcohol affects the structure and chemistry of the brain, producing neuroadaptations that contribute to depression and anxiety during withdrawal from alcohol.

Jessica Cassleman Named Among Top Advisors in the Nation (05/10)

Jessica Cassleman and two other advisors in January received Outstanding Academic Advisor awards for 2009 from the WSU Academic Advising Association (ACADA). Respectively, their awards were in the categories of faculty who teach as well as advise, administrators who advise, and advisors for whom that is their primary role. The local chapter nominated the three for national award consideration.

In April, the National Academic Advising Association (NACADA) sent word to WSU ACADA officers that Cassleman received its top honor, the Outstanding Advising Award, in the faculty category. The others received Outstanding Advisor Certificate of Merit awards in the administrator and primary role categories. All are for year 2010. More>>

The WSU Association for Faculty Women honored Honors faculty member Lori Carris, associate professor in plant pathology, with its annual Samuel H. Smith Leadership Award. Carris is known for her advocacy for faculty women. She has served as chair of AFW as well as on a variety of other committees.Carris “has that rare synergistic ability to bring people together and catalyze them to produce more than they could have independently,” said one nominator. Another said Carris “affirms other women as leaders and promotes a supportive environment at WSU for all people.”

The Samuel H. Smith Leadership Award was established in 2000 to show AFW’s appreciation to WSU President Emeritus Smith for his leadership in advancing the role of women at WSU. The award is made to an AFW member whose leadership has helped women in the WSU system and/or those who have demonstrated leadership in higher education, the community or profession at the local, state, regional, national or international level. 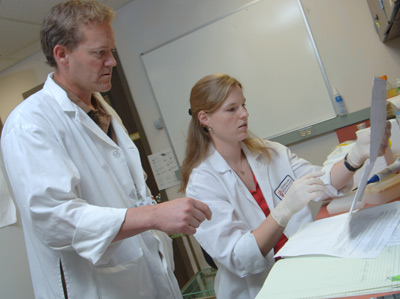 Honors Council member Doug Call , associate professor in WSU’s Veterinary Microbiology and Pathology Department, is the first recipient of the Caroline Engle Distinguished Professor in Research on Infectious Diseases. Call’s distinguished professorship will span four years.“It’s always an honor when colleagues recognize the value of our work,” said Call, a molecular epidemiologist who specializes in antibiotic resistance research. “Our lab will use the awarded funds to conduct pilot studies and to support graduate education and recruitment.”

Call is a nationally recognized scholar who, in addition to his work on antibiotic resistance, has an active research program in food and water-borne diseases and salmonid aquaculture. More>>

Honors faculty member Rachel Halverson received the Washington Association of Foreign Language Teachers (WFLT) award for Continued Distinguished Service in October. The award recognizes instructors whose contributions to the world language profession have been unflagging and have enjoyed widespread impact.

Long-time Honors College faculty, administrator, and thesis advisor Carol M. Anelli will receive the Entomological Society of America’s Distinguished Achievement Award in Teaching at the organization’s annual meeting in December in Indianapolis, Indiana. The teaching award is presented annually to the Society member deemed to be the most outstanding teacher of the year, and brings with it a monetary award. Persons nominated for the honor must have “excelled through innovations in developing new courses, programs, and teaching methods” and are evaluated in the categories of classroom instruction, other teaching aspects, and outreach and activities.

University Recognition: Two Honors faculty members received special recognition at the university level. Sheila Converse, clinical assistant professor in the School of Music in the College of Liberal Arts and Fred Gittes, clinical associate professor in the Physics Department in the College of Sciences, are the first recipients of the new WSU Distinguished Teaching Award presented by the WSU Teaching Academy to non-tenure track instructors at WSU who have displayed exceptional commitment to teaching.

WSU 2008-2009 Sahlin Faculty Excellence Award for Instruction was presented to Carol Anelli, associate professor of entomology and Honors thesis advisor and teacher, at the WSU Showcase event in March.

Lori Carris, an associate professor of plant pathology and Honors faculty member, was named a 2009 WSU Woman of Distinction at the WSU Women’s Recognition Luncheon in March.

Outstanding Thesis Advisor: Tom Dickinson, Regents Professor and professor in the Physics Department in the College of Sciences, and Pat Carter, associate professor in the School of Biological Sciences

Special Faculty Awards: Ana Maria Rodriguez-Vivaldi, associate professor in the Department of Foreign Languages and Cultures in the College of Liberal Arts, and Lisa Carloye, clinical assistant professor in the Science, Math and Engineering Education Center