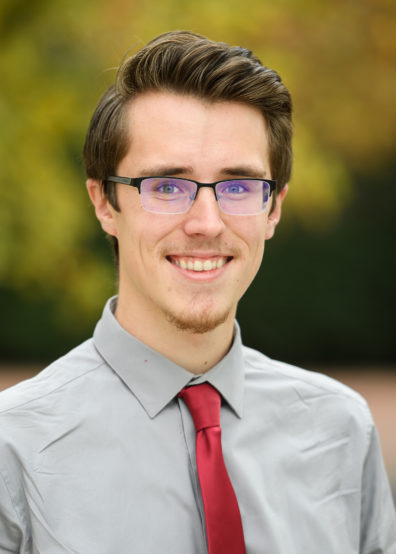 “The interview process was fascinating, plus I made new friends,” Summers said Sunday.

“It’s all been a great experience.  From the time I first thought of applying, I have had amazing support from my family, friends, and so many at WSU along the way. I am very thankful.”

WSU President Kirk Schulz said, “Ryan is an exceptional and well-rounded individual who already has a patent, national awards, and international collaborations, and on behalf of WSU, I am proud that he became a finalist for this highly competitive international scholarship.”

In a September endorsement letter to the Rhodes Trust, Schulz said, “Mr. Summers is committed to leading us into a new technological age where computers communicate with each other intelligently and adaptively in integrated systems…he envisions drones communicating with firefighters’ computers on the ground to more effectively and safely extinguish vast, destructive forest fires…he also sees a future where cars not only drive themselves but ‘talk’ with other vehicles and recalculate routes based on traffic congestion.

Summers, who will graduate with a B.S. in computer engineering on Dec. 9, rose to the top of the Rhodes’s strong field of applicants. For the 2018 cohort, the trust reports that 2,500 students sought their institution’s endorsement; 866 were endorsed by 299 colleges; and, in September, 228 applicants from 100 different schools reached the final interview stage, divided among 16 U.S. districts. Following interviews, two from each district—32 total—were elected to the next cohort of American Rhodes Scholars. Summers was invited by the 14th district, for those from Washington, Alaska, Idaho, Montana, and Oregon.

Rhodes Scholarships cover all expenses for two or three years of study at Oxford University in England. Depending on the student’s field, the total value of a Rhodes Scholarship averages around $68,000 per year toward graduate education.

“Ryan has worked closely with our office and committees for more than two years while strengthening his resume and, thus, his eligibility for top awards, but ultimately becoming a Rhodes finalist is the result of his own hard work, tenacity, and sharp focus on his goals,” said April Seehafer, director of the WSU Distinguished Scholarships Program. Its new “opportunity fund” helped to send Summers to Seattle for the Rhodes district events.

Added Robin Bond, Honors College assistant dean, “Ryan is very impressive. He understands cutting-edge technology and also appreciates the broad social impacts of innovation. The breadth of Ryan’s accomplishments is a testament to his remarkable intellect, curiosity, and energy. I have no doubt that he will make significant contributions in the field of autonomous design.”

Summers said applying and interviewing for the Rhodes further clarified his goals. “I want to do things to make the world a better place.”

The only engineer among the District 14 Rhodes finalists, he is interested in pervasive computing, which, he explained, is how computers can be implemented into many parts of our lives to improve the quality of life. Part of his career will be focused on building and improving self-driving cars.

“I believe that such cars, by communicating with each other, have the potential to save 30,000 lives in one year in America alone,” said Summers.

But first, early in 2018, he will return to Germany and attend the Technische Universität Dresden, taking classes to complete WSU requirements for a language and culture degree in German. In August, he plans to return to California for a job at SpaceX. Three summers of internship experiences took him originally to Germany and the aerospace manufacturing and space-transport-services company.

“In the future, maybe I’ll start a company with friends from the Palouse Robosub Club,” said Summers. “We have talked about a robotics startup, one that uses ‘swarming algorithms’ so that robots—on their own—work together.”

“Don’t hesitate to take on a lot, and really big projects, because nothing’s impossible.”

A native of Stanwood, Wash. and graduate of Lakeside High School, he is the son of WSU alumnus E. Kevin (’81 electrical engineering) and Beverly Summers.  He came to WSU as a Regents Scholar in fall 2013 having earned credits at Evergreen Community College. He has maintained a 4.0 GPA at WSU and is, among many things, also: A German language and culture major and recipient of its Outstanding Student award; recipient of the 2017 WSU President’s Award for Leadership; president of the Palouse Robosub Club; an organizer of the first annual Hardware Hackathon; recipient of the Voiland College of Engineering and Architecture’s Senior of the Year Award and its School of Electrical Engineering and Computer Science Outstanding Sophomore, Junior, and Senior awards; recipient of two top awards from the Showcase for Undergraduate Research and Creative Activities (SURCA); and recipient of more than a dozen scholarships from WSU donors and friends.

In 2015 Summers was a DAAD-RISE scholar in Germany; his work there led to an invitation to present at a technology conference in China.

He also interned for two summers at SpaceX, Elon Musk’s California aerospace manufacturing and space-transport-services company. There, he developed programs for flight computers that are now used on the company’s famous, reusable Dragon spacecraft. His exceptional performance resulted in his appointment as lead engineer on a project.  [https://vcea.wsu.edu/2017/04/06/summers-internship/]

For the 2016-17 and 2017-18 academic years, he received the prestigious Barry M. Goldwater Scholarship, which pays $7,500 annually toward recipients’ university expenses during junior and senior years.  [https://distinguishedscholarships.wsu.edu/2016/04/28/goldwater-winners-2016/#more-2347]

As an undergraduate, Summers pursued projects that apply parallel-computing techniques. In a WSU crop and soils sciences and molecular plant sciences laboratory, Summers worked with mentors Zhiwu Zhang and Meng Huang to apply computing skills to research key genes within plant DNA. This resulted in patented DNA-analysis software technology that is faster than any other available and will allow DNA databases to be mined for the benefit of human health in ways that were not previously possible. The three are collaborating with the WSU Office of Commercialization to prepare this technology for the marketplace.

WSU students and alumni have won more than a hundred distinguished scholarships over the years. From the first winner in 1907 through 2010, a total of 64 distinguished scholarships were received. In 2011, the Distinguished Scholarships Program was begun to help students build strong resumes across their undergraduate years, to boost their eligibility for the most prestigious awards; the program draws on the expertise of many faculty, staff, and administrators university-wide to be part of the process. Since 2011, students and alumni have won 96 awards in six years—32 more than in the previous century.

Displayed in the Distinguished Scholars Gallery in the CUB in Pullman are winners of Rhodes, Goldwater, Gilman, Udall, Boren, Fulbright, and Truman scholarships. The awards support education and experiences both at WSU and foreign institutions, depending on the award. For information on the scholarships, and recipients from WSU, visit https://DistinguishedScholarships.wsu.edu.