PULLMAN, Wash. — Three seniors from the Honors College at Washington State University were awarded Big Ten Seniors recognition from the WSU Alumni Association (WSUAA).  Rachel Wanty, a neuroscience and Spanish double-major, and Omar Bayomy, a neuroscience major, earned the honor in the academics category, while Graham Dart, a music performance and economics major was recognized in visual and performing arts.

Since 1900, the university has recognized the top 10 graduating seniors in five different categories, including academics, athletics, campus involvement, community service, and visual and performing arts. One male and one female are selected per category. The Student Alumni Ambassadors and the WSUAA now host the Big 10 Seniors awards program. The winners were  recognized as Big 10 seniors at the May 2012 Graduate Barbeque Bash.

According to the WSUAA, “The most qualified five men and five women, each representing a specific aspect of the college experience, was chosen. This is a highly competitive and prestigious honor.” This year, all of the Big 10 Seniors are receiving lifetime memberships to the WSUAA, valued in 2012 at $600. 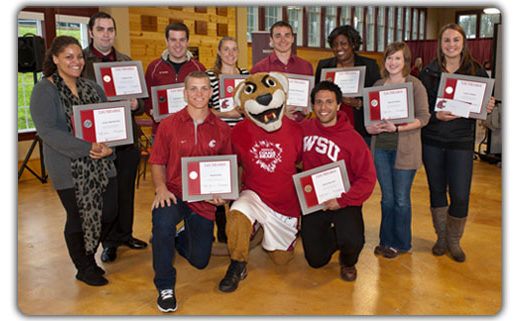 Wanty has served as the co-president of the Honors Student Advisory Council, and has maintained a 3.96 GPA as a double major in neuroscience and Spanish.  At the 2011 Undergraduate Research Symposium, Wanty won first place in both her category and the people’s choice award for her presentation. She has also been recognized with a Peter A. Zornes Memorial Neuroscience scholarship. She will attend Colorado State University in fall 2012 for veterinary school.

Bayomy has served as an academic tutor in chemistry, biology, physics, and calculus while working for the Department of Chemistry as an undergraduate teaching assistant.  Bayomy has worked in the laboratory of Regents Professor James Krueger in the College of Veterinary Medicine where he researched the physiology of sleep.  His work has been published in the Journal of Applied Physiology and presented at the 2011 SLEEP conference in Minneapolis.  Bayomy graduated from WSU with a 4.0 GPA. He will continue his studies at Harvard Medical School in fall 2012.

Dart has participated in ensembles with the School of Music and given numerous recitals. In 2010, Dart was the winner of the MusicFest Northwest Young Artist Reed Division.  As a member of the WSU Wind Ensemble, Dart was also featured at the Western/Northwestern College Band Director’s National Association.  Along with his degree in music performance, Dart graduated from WSU with a degree in economic sciences and plans to continue his studies as a master’s in music candidate at the University of North Carolina-Greensboro in fall 2012.
For more information on the “Big 10 Seniors” Award, please visit the WSU Alumni Association page.