The final day of what has been an amazing experience. Through this Fulbright program I see the possibility for more opportunities for our students to spend time at German universities. My hope is that over the next few years that many more students from the Honors College will find programs in Germany that will internationalize their education and take advantage of what this incredible country offers. I also hope that students from Germany will come to Washington State University and we can create strong partnerships in education and research. On a personal note, I thank my fellow Fulbright Germany colleagues for being outstanding traveling companions and I hope we have many opportunities to connect in the future. 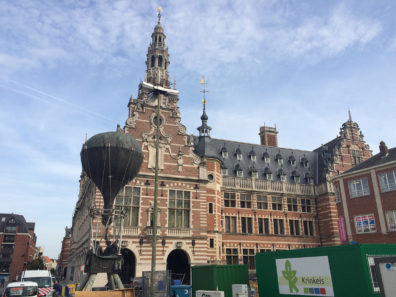 Accompanied by staff from the Fulbright Belgium office we took the metro to the Académie de Recherche et d’Enseignment Supérieur (or ARES) where we were given the broader European perspective on internationalization of higher education. A common theme is developing approaches to internationalize curricula and provide opportunities for students to increase their global awareness. Even if students don’t travel abroad working together with international students can provide very valuable experiences. This approach is what we are doing in Honors with our global leadership program where we partner our students with Honors students from Southeast University in Nanjing to work on a project that has a global impact. Through this Fulbright program I can see where we could develop similar projects with German universities. 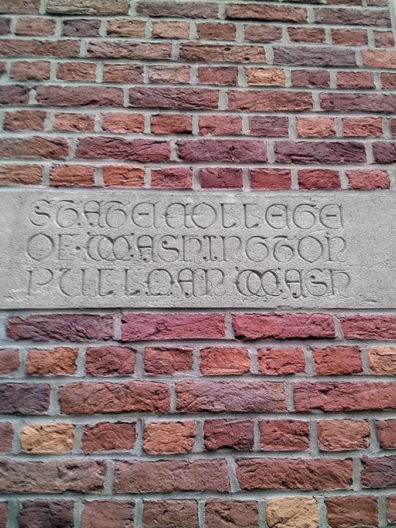 In the afternoon, we traveled to Leuven by train. After a short walking tour that involved enjoying some delicious handmade Belgian chocolates we spent the rest of the afternoon at KU Leuven. This is one of Europe’s flagship universities and has a very nice Cougar connection. During World War I the original library at KU Leuven was destroyed by fire. After the war, the library was rebuilt with support from American universities. One of those institutions – whose name is carved into the stone pillars – was the State College of Washington (later to be our WSU!) – a great example of Cougs helping others. The picture is of the current library, which was repaired and expanded after further damage during World War II.

Our Fulbright group was invited to join a special decade anniversary celebration of KU Leuven’s doctoral programs: Looking Back to the Future. Three of the presentations were from students that had received their PhDs within the past five years. All of them said that they had not been adequately prepared for life beyond graduate school and certainly not for careers outside academia. Hearing the perspectives of these students made me appreciate what our GPSA is doing for our students in terms of professional and personal development. Go Cougs! 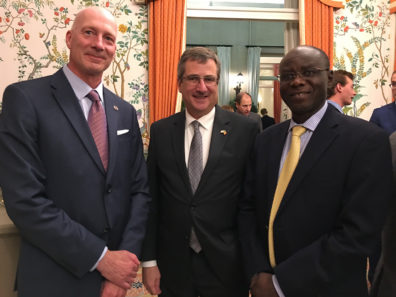 Our Fulbright journey took us to Brussels, the capital of the European Union. On our two-and-a-half-hour train journey from Bonn we met up with our Fulbright group that had visited Technische Universität Darmstadt. It was interesting to share our experiences of two very different regions of Germany. A common theme that emerged was the openness of German institutions to partner and work with their counterparts in the United States and also the way that Germany’s higher education institutions have accommodated refugees.

After checking into the hotel we walked to the Royal Library of Belgium to meet with the Fulbright group that had spent the past few days visiting universities in France. Each group reflected on their experiences. The day was complete with a reception at the U.S. Ambassador’s residence at Rue Zinner, which ranks only behind its counterpart in Rome as the oldest house owned by the U.S. Government. We were welcomed by the Chargé d’Affaires Matthew Lussenhop (center of picture) and enjoyed meeting past and present Fulbright recipients living in Brussels. 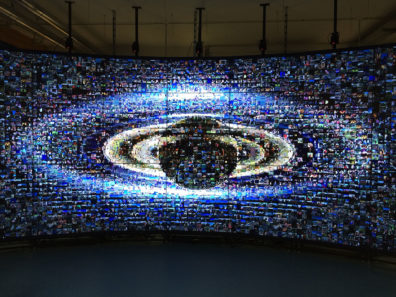 Today was our last day at H-BRS. We learnt more about the unique international programs that the university offers. But the morning started with our Fulbright group taking part in an undergraduate class on Intercultural Communication. It was a great experience talking with a diverse group of students about German culture and American culture. Our class contained students from Germany, France, Canada, Russia, Turkey, Kenya, and Ghana. H-BRS, like many German universities, has undergraduates from many countries. In some classes, German students are in the minority. The theme of internationalization continued through the day and ended with a look at transfer projects between H-BRS and countries in Africa.

The picture shows what is called the Hornet – a display wall that is use for high resolution visualization. The image, at a distance is Saturn, but close up is comprised of thousands of individual images. It reminded me of Pear Blossom Highway the photo collage by David Hockney where individual images create a picture that is more than the sum of its parts. 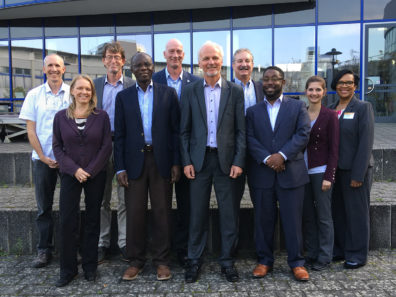 We spent today at Hochschule Bonn-Rhein-Sieg (H-BRS). This is one example of a University of Applied Science. It is only 23 years old and was formed when the German capital was moved back to Berlin. Part of the relocation package was investments in the Bonn area, including the creation of H-BRS. The university already has 8,000 students. The mission of H-BRS includes knowledge and technology transfer. Our meetings today included a visit with Dr. Udo Scheuer who is involved with their impressive entrepreneurship program. It is ranked in the top 3 in Germany. Entrepreneurship and innovation were emphasized in the afternoon with presentations on their Building Bridges across Continents program and the International Center for Sustainable Development.

In the evening we enjoyed dinner in Bonn with our host Prof. Dr. Jürgen Bode – center of picture – and a nighttime tour of Bonn with the “night watchman”. Although Bonn may have lost the title of capital it is a thriving city with a rich history. 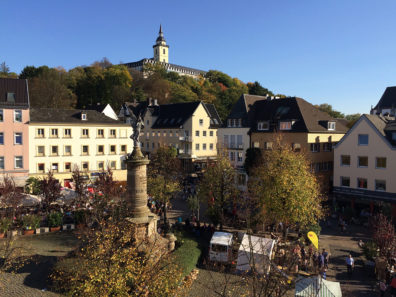 Six of us made the journey to Siegburg. We were met at the Siegburg/Bonn railway station by our host Laura Berger. The Hotel zum Stern is a short walk from the station and situated on the edge of the main city square. From my window (attached picture) I can see the Siegessäle (Victory column) and beyond that the Benedictine monastery Michaelsberg Abbey, which was founded in 1064. Siegburg is famous for its pottery, especially for the Siegburg pitchers (Siegburger Krüge). I am hoping to see examples of Siegburg pottery at the Stadtmuseum Siegburg and maybe include a picture in the next edition of “Ceramic Materials”. 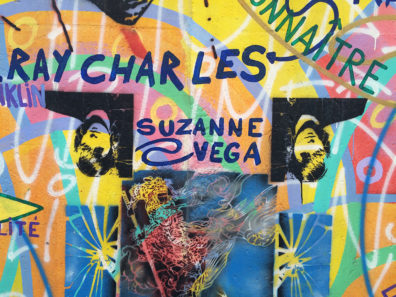 Today was a rest day. A day for us to explore Berlin in whatever way we wanted. My two priorities were the East Side Gallery of the Berlin Wall and the Hertha Berlin-Schalke 04 football game.

The East Side Gallery is a collection of 105 paintings painted in 1990 on the east side (the formerly Communist side) of the Berlin Wall. Probably the most famous of the paintings is the one of Leonid Brezhnev and Erich Honecker kissing. My favorite – although they are all interesting – is the one in the picture: the mural of musicians.

Hertha Berlin play at the Olympiastadion, which was built for the 1936 Summer Olympic Games. You enter the enormous stadium between the same columns and under the same Olympic circles as those spectators who saw Jesse Owens win four gold medals and rain of Hitler’s parade. Today was not a good day for Hertha Berlin either as they lost 2-0.

This is our last day in Berlin. A city whose complex past makes it an incredible city to explore. At the same time, Berlin is a city for the future yet the past is around every corner. I hope there will be a time to return.

Today was filled with meetings. Karsten Voigt, a former member of the Bundestag and the Federal Foreign Office, talked about the role of Germany in the world and in particular transatlantic relationships. He was joined by Brent Goff, who was born in North Carolina, but works for Deutsche Welle TV. It was clear that Germany is playing and will continue to play an increasingly major role in the world, whether it wants to or not. Both speakers were very concerned about what is happening in the United States and in the United Kingdom. Inse Böhmig from Humboldt-Universität described how refugees are being integrated in German higher education. Germany’s universities have developed extensive programming to help support refugees, which mainly come from Syria. These programs and the record number of students are straining university resources, but the open-armed approach adopted by Germany toward refugees is very impressive.

There are two programs that were discussed that were new to me, but would make excellent opportunities for our Honors students. The Chancellors Fellowship Program offered through the Alexander von Humboldt Foundation is a program directed towards undergraduates that have the potential to be future leaders. The Berlin Capital Program offered by the Fulbright Foundation is a great opportunity for future journalists interested in learning more about Germany.

In the evening, I went to see the most amazing performance of Die Zauberflöte at Deutsche Oper Berlin. The words of the quintet in Act 1 have as much relevance now as when Emanuel Schikaneder wrote them in the 18th century. They also connected with the comments shared by the speakers in the morning.

If only every liar had a lock like this upon his mouth:
Then would hate, calumny, and rancor
Be replaced by love and brotherhood! 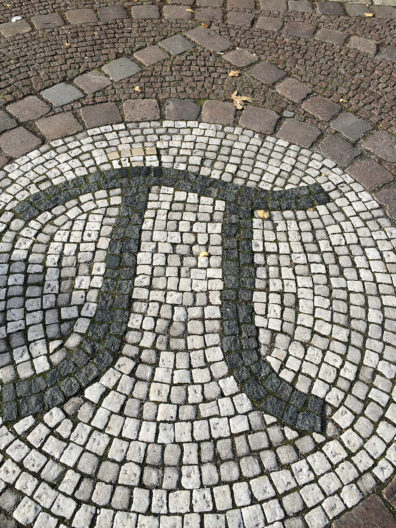 This evening we enjoyed a delicious meal at Habel am Reichstag, a restaurant built under the arches of an active railway bridge. Its location is much like the Hole in the Wall pub by Waterloo station, just more up market, but still with the constant rumble of the trains passing overhead.

The meal was a wonderful end to a day spent at the Technische Universität Berlin. TU Berlin is proud of its history in the British sector (and the visit of the Queen in 2015) and is one of the leading research universities (centers of excellence) in Germany. One of the speakers, Nadja Wisniewski, talked about the TU Berlin philosophy of an “alliance between technology and the humanities to meet the challenges of the future.” A philosophy that technology should always be used for the good of society and not for other purposes.

The picture is a mosaic on the TU Berlin campus at the entrance to the mathematics department. 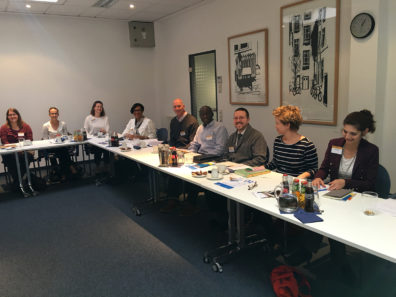 Today we were at the Fulbright Office in Lützowufer Street. In the picture I am sitting between Dr. Angela Miller, Director of Study Abroad Services at the University of Florida and Dr. Andrew Sobiesuo, Director of the Center for International Education at College of Charleston. The focus of today was to learn more about the German system of higher education. The system has much to offer in addition to the absence of tuition fees! The Excellence Strategy (formerly Initiative) will make major investments in the research universities over the next several years. But with enrollment at record numbers (2.8 million students) they face many of the issues we do in the US – funding and student retention.

We were constantly reminded about the unfortunate decision of the UK to Brexit: a move that will have major implications for international collaboration in research and higher education in Europe. If the intent of the Brexitiers was to cause chaos, as Billy Bragg noted recently in Seattle, then they have certainly met that outcome within the higher education community in Germany.

Many of the goals of German universities match those of our Honors College: a focus on liberal arts, internationalization, and study aboard. By 2020 the policy goal is that 50% of graduates should have realized a minimum of 6 months study abroad experience (the current number is 28%). In Honors we have reached as high as 40% in some graduating classes.