Sometimes you win, sometimes you lose. We started out the day with the latter at the National Museum of Denmark, no less. I don’t mind ripping them this evening writing this blog because it is fundamentally such a lack of professionalism. We are a group of Americans coming for a booked, guided tour of the Viking section but the day before, en route, I receive an email that the museum “hasn’t been able to find someone who can do that,” so, instead, we are offered an exciting guided tour in English called “Survival!” taking us through pre-history, from the earliest Stone Age through the Bronze Age to the Iron Age all under the guiding light of the amazing human ability to survive. Amazing, indeed.

“Hasn’t been able to find someone who can do that” -!? The Vikings!? The freakin’ Vikings!? Hire me, guys, I can do that standing on one foot, arms tied behind my back, with a blindfold! The National Museum of Denmark!? Maybe it was the remuneration of DKK 650.00 for a one hour conversation ($100) that was insulting (I didn’t set it) for professional staff attached to the Museum; maybe it was just too hot; maybe well-deserved summer vacations were not to be disturbed. To which – all of the above – I recommend some fall workshops involving spades and long trenches to be dug. And, some serious attention to the institutional mission.

The young lady did her best with what she had to work with: a sappy manuscript of technological development: from flint stones to the more refined Bronze Age and I can’t recall ever really getting to the Iron Age although we hurried past what seemed to be a collection of Roman artifacts. The scripted, planned route also had her skip past a display cabinet (which she continuously referred to using the Danish (i.e. French) word: “montre” containing two interesting, actual skeletons which had caught the attention of several students causing them to stop in their tracks. I brought her back, she improvised and kindly pointed to a few items that had been placed in the burial but wasn’t sure about the time of the burial. The whole thing was concocted under the sappy, sentimental guise that “Look! For thousands of years we, humans, survived by refining stones, then we used bronze, then… doesn’t that give us the hope that we will survive the hardships thrown at us in this very day and age!?” Yes, that was it. Whatever contemporary hardships the author (authors?) of this summer’s audience-magnet had in mind we were never told. If, for example, in the mind (minds?) of whoever responsible for this sap a parallel should be drawn between scraping the hide of a saber-tooth tiger, freshly killed, and the impending limitations on the use of diesel engines in big cities – it would have been nifty receiving a few pointers. Palpably the young lady’s delivery had the chirpy enthusiasm undoubtedly appreciated by 5-year-old’s. Her English employed a limited vocabulary and a heavy accent.

A sappy concoction written by whom!? An intern? Most likely someone high up. We don’t need the Disney corporation in Denmark, we’ve got the National Museum. It leads me to speculate that if the responsible parties for the museum weren’t handsomely employed and protected by what we here in the US like to think of as “the Scandinavian socialist model,” you wonder, whether such nonchalance towards their public mission – and national, no less! – wouldn’t be the cause or should be the cause of some sort of self-induced implosion.

But without doubt it’s an institutional success story. And how can you go wrong with all those exquisite treasures garnered through centuries while of course having the historical and sentimental support of the population. As should be for a National Museum. Judging from the lushly stocked museum store (where the only question is where in China their stock is made) the National Museum of Denmark is so successful it must hurt. You just want to avoid the pre-packaged tours. As one of my students said to me: “It would have been better if we could just walk around and read the captions. There are so many interesting things!” Yes, indeed. 0 for 1. And it has happened before there. O tempora o mores. Survival indeed. The whole thing was so depressing that I forgot to take any pictures.

Then we won. Thank goodness. And, boy, did we win. We won so much, it hurt, we almost got tired of winning. In the afternoon, at 1300 hours, we had an appointment at the Copenhagen City Hall. Now, I’ve been trying to get one of those for years but for whatever the reasons it never materialized: logistics, the city hall is an extremely busy place popular with weddings from all over the world while also being the heart of the significant city administration. It’s Copenhagen – we love Bergen but this is Copenhagen, not Bergen. But this time my pre-planning resulted in a touchdown. Not just a guided tour – set for two hours! – but crowned with serving us the world famous COPENHAGEN CITY HALL PANCAKES WITH A GLASS OF WHITE WINE! That’s just about as royal it gets in the proud bastion of participatory democracy which is the heart and soul of Copenhagen and of the the Danes.

Kristoffer Ruth Sahlholdt who is a staff member at the city hall and have hosted guided tours of the hall for 17 years, and have written an informative book on the city hall, was our exceptional guide. His main interest is the ingenious ways the architect of the city hall completed in 1905, Martin Nyrop, incorporated references to Nordic mythology, directly so, but often also hidden while integral to a holistic conception of the hall. Kristoffer sees Nyrop as an architectural genius comparable to Gaudi. He pointed out the symbolic function of imagery (e.g. owls, dragons) and how woodcarvings in staircase railings reinforced the building as a people’s city hall where its representatives are constantly, consciously and subconsciously, reminded that their job is the welfare of the citizens of Copenhagen if not the nation.

Kristoffer was born in Sweden to Danish parents and has the advantage of being able to see things with an outsider’s sensitivities. He has interesting takes on the peculiarities of the Danes. Compared to the Swedes whose cultural temperament is one of wanting set frameworks for understanding and definition, the Danes just don’t really seem to care. For example, he said, they understand and respect hierarchy but the hierarchy at the same time must operate on some some sort of equal basis. Fascinating. After the classy pancakes and the sparkling wine Kristoffer treated us a to a visit in the great hall for celebration on our way to climbing the City Hall Tower, 320 feet tall, once the tallest in Denmark. 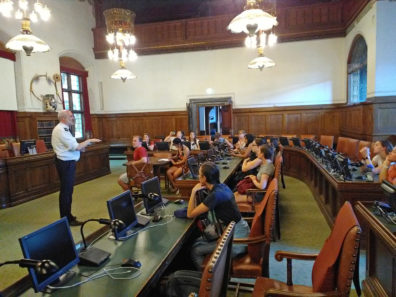 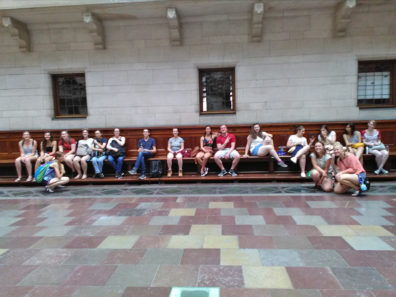 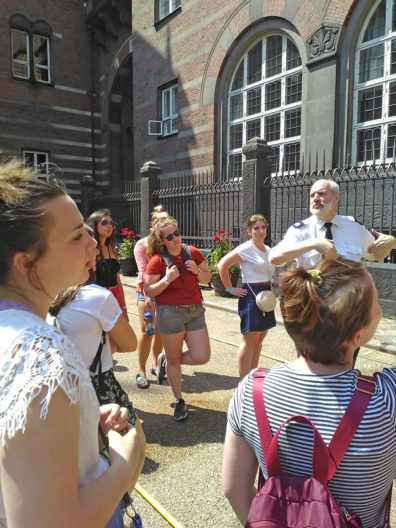 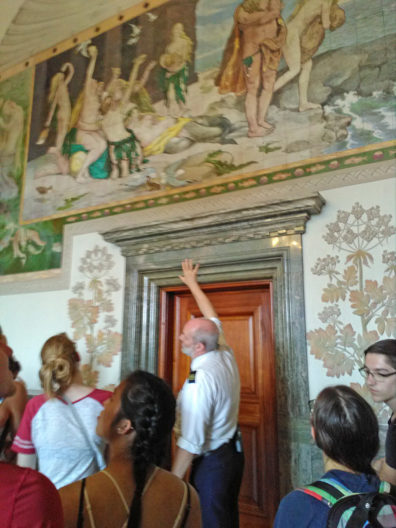