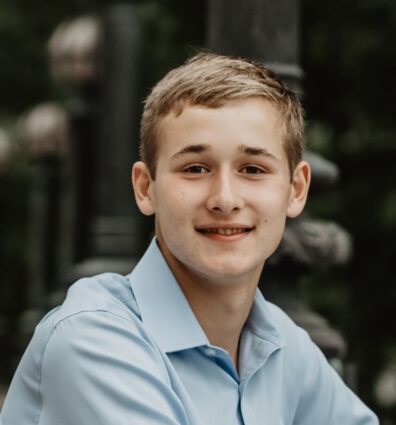 PULLMAN, Wash.—The Barry M. Goldwater Scholarship and Excellence in Education Foundation has announced that Honors College student John Bussey is one of three at Washington State University to receive this year a $7,500 award to support his education.

Prestigious, nationally competitive Goldwater distinguished scholarships are given to high-achieving undergraduates intending to pursue careers in math, the natural sciences, or engineering (STEM). These latest awardees bring WSU’s total number of Goldwater recipients to 48 since the first in 1990.

Bussey, a sophomore from Olympia, is an Honors College student majoring in materials science and engineering, minoring in environmental and resource economics and mathematics, and seeking a nuclear materials certificate.

“Receiving the Goldwater is certainly an honor for me, plus it recognizes that environmental sustainability is a critical issue for our collective future that requires advanced research. It’s a vindication of the work I’ve been doing,” said Bussey.

“I’m excited to see what the next few years of my education hold, and the Goldwater enables me to double down on my efforts.”

Bussey is serving a summer internship at the Consortium for Risk Evaluation with Stakeholder Participation at Vanderbilt University in Nashville, Tenn.  He is studying materials for safe disposal of nuclear waste. This work continues his quest to better understand materials involved in nuclear waste storage in order to safeguard human health and the environment for over 100,000 years, he said. It adds to this future researcher’s career goal to design, synthesize, and characterize novel materials that can help address nuclear waste, climate change, and other environmental sustainability issues.

A Distinguished Regents Scholar, he chose to attend WSU after meeting with McCloy and seeing the opportunities WSU could offer. Plus, his Cougar parents met in front of Honors Hall, where Bussey has lived his entire time at WSU. His father, Troy (‘94 BS and ’96 MS, both in chemical engineering) works for Pioneer Technologies Corp., and his mother, Carie (Ingold) pursued pre-nursing studies at WSU and today works for Olympia Obstetrics and Gynecology.

When not in classes or researching, Bussey busies himself as a delegate and recruitment chair of the President’s Council of Student Advisors for The American Ceramic Society, and at WSU as an ambassador for the Voiland College of Engineering and Architecture and facilitator for Honors 198 (Honors First Year Experience) and 298 (Approaches to Global Leadership) courses. He also serves as treasurer and blacksmith-forge builder for the Materials Advantage Club, and as an officer of the Honors Student Advisory Council, among other opportunities.

The Goldwater organization announced that 417 awards were made to U.S. college students this year—308 to natural sciences majors, 64 to engineering majors, and 45 to math and computer science majors.

“WSU has established a strong set of Goldwater awardees over the years, and the addition of this year’s recipients reinforces that tradition,” said April Seehafer, director of the WSU Distinguished Scholarships Program. Her program is part of the Division of Academic Engagement and Student Achievement (DAESA) in the provost’s office.