Daniel knew he wanted to get involved in research as soon as he could and joined a research lab only a month after starting at WSU. With an academic year of research experience Daniel was able to do an REU internship over the summer at the University of Louisville studying nano-robots. He worked in a clean-room, the same type of room that computer companies use to make their computer chips. Daniel’s work was recognized at the 2017 National Nanotechnology Coordinated Infrastructure Conference at Georgia Tech where he presented his work alongside students from Stanford, Cornell, University of Texas at Austin. 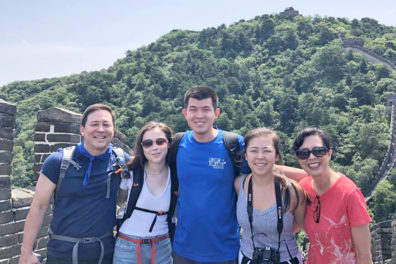 Daniel enjoyed the experience so much that the following summer he did an internship in China at Southeast University where he created quantum dots for next generation Samsung televisions. During his internship he was able to visit the Forbidden City, the Great Wall, Shanghai, Tiananmen Square, and the Emperor Qin’s Terra Cotta Army.

In the future, Daniel wants to work as a Manufacturing Process Engineer or Chip Architect for a computer chip company. This decision was influenced by his passion for creating nanotechnology devices. Daniel will be interning with Micron Technology over the summer of 2019 as a product engineer in the DRAM group. Micron’s DRAM is sold worldwide as the Ballistic and Crucial memory systems for computers. This internship will allow him to do work that combines his backgrounds in electrical engineering and material science engineering.

Outside of research and classes, Daniel founded and is currently the Captain of WSU’s first Battlebots Club. Battlebots is a gladiator style competition between two robots that airs on Discovery Channel and Science Channel. Daniel started the club because he always dreamed of having his Battlebots team after watching the show as a child.

Daniel also enjoys competing in hackathons; 24-hour long competitions where teams of 4 create a new technology. In 2017 Daniel won his first hackathon at WSU’s annual Hardware Hackathon. Out of 100 students, Daniel’s team took first place. In 2018, Daniel’s team took first place at the annual Crimson Code Hackathon in the IoT Category. Daniel’s team won the Hardware Hackathon again in 2018 with a revolutionary product that used artificial intelligence to automate produce storage and increase shelf-life. Daniel was chosen in 2019 to compete in the first ever Hack Washington event at the Space Needle, one of the biggest hackathon events in the Pacific Northwest with students from across the nation. With a team made up of students from University of Washington, Berkeley, and Washington State University, Daniel’s team took first place in the general category. They also won the Microsoft Azure Prize and qualified for the semi-finals of the largest hackathon event in the world, Microsoft’s Imagine Cup. They also took second place in Amazon’s Web Services Category for their use of the Amazon Alexa Voice Services in their project.

To give back and connect to his community, Daniel serves as an ambassador to the Honors College. He enjoys connecting with prospective students and sharing the opportunities available at WSU.

Daniel Goto is a great example to show that Honors College students can and do pursue their interests and take advantage of opportunities shortly after they arrive at WSU. We’re so glad Daniel chose to join the Honors Cougar Family!