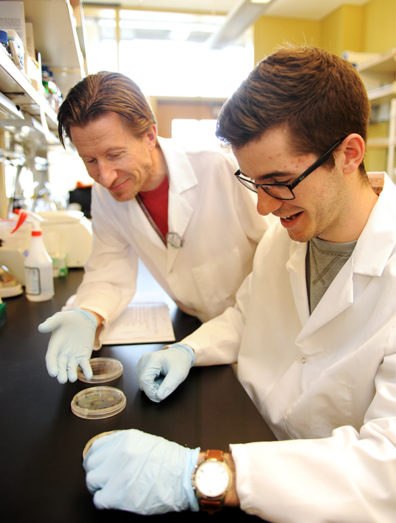 Goldwater scholarships are among the most prestigious, nationally competitive awards given to students nominated by their universities. Winners are from science, technology, and engineering (STEM) fields, are academically high achieving, and have experience in, and aspire to, a career in research. Since 1989, the program has provided to U.S. students more than 8,100 scholarships totaling $65 million dollars.

“This is a huge honor for me and WSU, but also a compliment that recognizes my hard work,” said Howard. “Especially since I know the competition was tough.”

Howard brings to 38 the total number of Goldwater awards received by WSU students.

Howard is one of 211 Goldwater Scholars for the year selected out of 1,280 students in 10 fields put forward by 455 institutions across the U.S.

“The nomination files we received this year were outstanding, so we clearly had to choose the best from among the best,” wrote Goldwater Foundation President John Mateja to WSU faculty representative Mary Sanchez Lanier, assistant vice provost.

“Zach’s many accomplishments spoke for themselves,” Sanchez Lanier said. “This is a very impressive achievement on his part. It also is testament to the excellent education, research experience, and outstanding mentoring he receives at WSU.”

High among Howard’s achievements in qualifying for the Goldwater are several involving scientific research and related presentations, awards, and a journal publication. While he said he discovered his field of interest at WSU, his first two research experiences were in high school.

In 2014, he took at Eastlake High a biotechnology course taught by Kristi Martinez. He explored whether bacteriophage—a virus that infects bacteria—would be more efficient at genetically modifying Escherichia coli bacteria than plasmids, a small circular form of DNA. The altered E. coli could then be made to produce biomedically important proteins. He designed experiments to compare the two methods and presented his results at the Northwest Association for Biomedical Research Student Bio Expo. (Coincidentally, standing next to him with her own poster was Keesha Matz, who would also come to WSU and become a Goldwater Scholar a year ahead of Howard.)

A second high-school research experience followed in the summer of 2014. Howard interned at Blood Cell Storage, Inc., a biomedical engineering firm in Seattle. Under the direction of Perry Hargrave, head of engineering, and Evan Rhead, mechanical engineer, he was tasked with optimizing fiber optics and determining the best placements of the optics for a photodetector to reduce noise and produce consistent readings. He presented his findings and results to the company executives at the conclusion of the internship.

WSU was on Howard’s academic radar. Older brother Nicholas (’15 Genetics and Cell Biology) was wrapping up his education in Pullman as Zachary was deciding on colleges. WSU’s Honors College invited him to join. And, the School of Molecular Biosciences (SMB) in the College of Veterinary Medicine (CVM) invited Howard into its renowned Students Targeted towards Advanced Research Studies (STARS) program. He decided WSU was the right fit.

In his first rotation with SMB Assistant Professor Alan Goodman, he studied the innate immune response to pathogens. He led a project on the transmission of the highly infectious pathogenic bacterium, Coxiella burnetii. He used fruit flies as a model to see if the bacteria could be transmitted from parent to offspring—preliminary results suggest it can. At the 2016 Showcase for Undergraduate Research and Creative Activities (SURCA) prestigious all-campus poster event, he won a second place award for a presentation on the subject.

A second project with Goodman—elucidating host and bacterial factors involved in Coxiella burnetii infection—resulted in co-authorship on a scientific paper published as the cover story in the journal Infection and Immunity in July 2017.

His second STARS rotation is with Assistant Professor Anders Omsland, of the Paul G. Allen School of Global Animal Health. Howard is examining how Coxiella burnetii responds to host-produced mammalian sex hormones, as studies demonstrate a difference in infection severity between males and females. He hopes to present his work at an American Society of Microbiology conference in the future. His poster presentation at SURCA 2018, “Progesterone Inhibits Replication of Coxiella burnetii in Nutrient Broth and During Infection of Cultured Cells,” won him another second-place award in the molecular, cellular, and chemical biology category.

Howard would like his third STARS rotation to focus on genetics.

“STARS experiences have shown me the excitement associated with producing results that advance a field, and revealed my interest in immunology,” said Howard. “I have gained respect for the effort that goes into all scientific discoveries…(my WSU experiences) have shaped my career goals and will continue to benefit me as I pursue a career in research.”

Family, O’Brien Scholarship, and the future

Howard is the son of Patrick and Vickie Howard, a Sammamish investment banker and entrepreneur and a nurse, respectively. Younger brother Ben is a business student at Arizona State University, and sister Eleni attends Eastlake High School. Brother Nicholas intends to become a physician and currently works at the Fred Hutchinson Cancer Research Center in Seattle.

Both Zachary and Nicholas received as WSU juniors the Cory O’Brien Memorial Scholarship, given to Eastlake High graduates who are juniors and seniors at WSU. Recipients since the first in 2006 must, like the scholarship’s namesake, have a passion for learning, live life to the fullest, and plan to give back to their community.

Howard has served on a university committee designing strategies to increase undergraduate involvement in research, helps the Molecular Biosciences Club explain science at children’s outreach events, is an SMB mentor to other students, and was an officer in the national Sigma Alpha Epsilon chapter at WSU, among other activities.

He plans to earn his Ph.D. in immunology and lead a laboratory at a university or government agency, researching the human immune response to bacterial pathogens and infections.

“Our immune system allows us to fight infections. Contributing to the collective understanding of the immune system as a researcher will allow me to make a difference in people’s lives all around the world.”