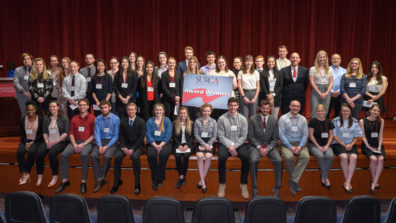 SURCA is the unique WSU-wide venue for students from all majors, years in college, and from all WSU campuses.

Heading into the afternoon event, 206 students from five campuses had been accepted to present 167 posters detailing their research, scholarship, and creative activity conducted with a mentor. Faculty, postdoctoral students, and community experts used a common rubric to judge and score all presentations in eight SURCA categories that cover all disciplines at the college.

At the concluding awards ceremony, 46 students were announced as the recipients of a total of 37 awards; one student received two awards. Awardees are from Pullman, the Global Campus, and campuses in Spokane, Tri-Cities, and Vancouver.

WSU tradition
“Being selected to present at this showcase is an honor, and the project quality and variety presented at SURCA this year was very impressive,” said Mary F. Wack, vice provost for undergraduate education. “The event showed that our students are eager to engage in learning activities beyond classrooms while also contributing to knowledge in their fields of study.

“The work they perform with their research mentors helps WSU move ahead in its drive to be a top 25 research university by 2030.”

Shelley Pressley, director of the Office of Undergraduate Research, said SURCA has become a WSU tradition. “It is rewarding to see that this event, which our office launched in 2012, is one that brings together several segments of the community—the undergraduates, faculty, staff, and guests. SURCA is part of WSU Showcase Week, which celebrates scholarly achievements across the institution. We are proud that SURCA is a significant part of that.”

SURCA 2019 award winners:
Winners are students in Pullman unless otherwise noted. By SURCA category in alphabetical order, the awardees and their mentors and research topics are:

Gray Award (1): Ryan Moore, mentor Lydia Gerber, on “Notions of Uyghur Identity Within Xinjiang and Their Development During the Late 20th Century”