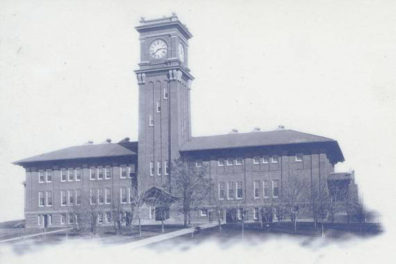 Every brick tells a story

Like many WSU students, Abigail Shane, a master’s student in architecture, enjoyed the iconic buildings and landscapes of Pullman’s campus but knew little about their history or architectural significance.

As part of a historic preservation seminar led by associate professor Phil Gruen, Shane and her classmates dove into school archives and digital resources, weaving the information they collected into a narrative about WSU’s built environment.

The students are developing a booklet highlighting more than twenty representative examples of WSU’s architecture that the class hopes will become part of the WSU design standards. The document, which is expected to be completed by early May, could be used by designers and builders to guide future remodeling and construction on campus, and also provide a valuable community resource, Gruen said.

Some of the information the students found changed their ideas of WSU history.

For instance, Bohler Gym, the first purpose-built athletic building on campus andhome of the WSU Athletics Department, was a gathering place for students protesting against what they saw as overly restrictive administration policies in the 1930s.And, the Compton Union Building (CUB) and the French Administration Building were occupied by students protesting against the Vietnam War and the shootings at Kent State University in the 1970s.

“I didn’t know that the buildings we hang out in everyday had such a rich history of student activism,” Shane said.

The class found other surprising stories, such as the fact that Carpenter Hall – current home of the School of Design and Construction – was supposed to have a grand front entrance facing Spokane Street. The idea of a grand staircase there was later abandoned, possibly due to long delays in construction or lack of funds. Carpenter Hall ended up with a “phantom” entrance on the second floor, now partially obscured by foliage.

“That entrance remains a testament to the past, and to those days when the early buildings of campus lined up to face downtown Pullman, making that visual link between ‘town’ and ‘gown’,” Gruen said.

The class also documented how the tides of history affected campus architecture.

In particular, rising enrollment from the post-war baby boomer generation meant more buildings and infrastructure had to be built to match the demand. In order to ensure the campus didn’t grow too big to walk between back-to-back classes, the campus developed a circular boundary with a 10-minute rule for student traffic.It was within these restrictions that the first “skyscraper dorms,” Orton and Rogers, were built in 1964 to ensure adequate housing for the burgeoning student body.

The class selected buildings spanning five distinct eras of campus construction in order to give readers a sense of the major developments in the university’s 125 plus years of history.

“I wanted the class to record the stories of each building embedded in its bricks, concrete, glass or steel,” Gruen said.

Apart from presenting a textual narrative, students also included archival and contemporary photographs of building exteriors, palettes of materials, close-ups of bricks, windows and tiles on the ground. Such artifacts help distinguish various eras of campus architectural development including the prominent foundational red brick in the late-nineteenth and early-twentieth centuries; and the post-war, “modern” period, when buildings more characteristically featured concrete and glass.

For Shane, the project required her to apply her critical thinking ability to see what each building represents, from the rich tradition of Stevens residence hall to the innovative spirit of the Spark.

“My favorite thing about WSU has always been the community here,” Shane said. “I’m glad to be part of an effort to show how our built environment reflects our community ethos.”

The project taught students the skills and perspective needed to understand a built environment in its historical context, said Irene Anderson, who is part of a group working to finalize the booklet.

“I learned how understanding the architectural identity of our campus is vital for its future development and in preserving its unique character,” Anderson said.

Gruen has also featured some WSU buildings in a more comprehensive statewide history project. He recently co-coordinated a project to feature 100 significant buildings in Washington as part of the Society of Architectural Historians Archipedia Classic Buildings project.