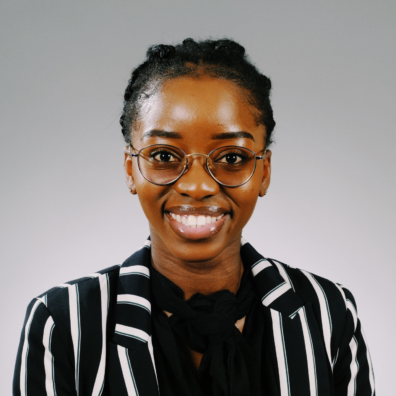 The Rhodes is the oldest prestigious scholarship program available to exceptional graduate scholars, providing funding for studies at Oxford University in the United Kingdom. WSU had 10 Rhodes Scholars from 1907 to 1956. Prior to Shola-Dare, the most recent finalists were in 1984 and 2017.

“Becoming a Rhodes finalist is an acknowledgement of my academic achievements and my career goals, and of the leadership roles I have held over many years,” said Shola-Dare. “With this accomplishment, I am confident I can do more, be better, and achieve even more in times to come.

“This is definitely a tremendous honor, one that I don’t take for granted,” she said.

Shola-Dare transferred to WSU as an international student from Nigeria in 2019 with plans to become a physician, a research scientist investigating the brain and cellular processes related to neurodegenerative disorders, and an advocate and policymaker for mental-health initiatives in her home country.

“Nife’s drive and confidence will allow her to accomplish great things both as a student and later as a professional,” said Mary Sanchez Lanier, WSU assistant vice provost. “Being a Rhodes finalist is further testament to her potential to impact the world in a very positive way. She is a tremendous ambassador for and representative of WSU.”

The Rhodes Scholarship for West Africa—part of the renowned Rhodes scholarship program—was announced in 2017 with its first scholar heading to Oxford University in 2018. In 2021, out of hundreds of applicants for the West Africa award, just 15 were selected to interview as finalists.

Rhodes awards were established in 1903 for “young leaders of outstanding intellect and character who are motivated to engage with global challenges, committed to the service of others, and show promise of becoming value-driven, principled leaders for the world’s future.”

Before transferring to WSU, Shola-Dare earned an Associate in Science degree in biology from Spokane Community College. She graduated from WSU this spring with a Bachelor of Science degree in neuroscience from the College of Veterinary Medicine (CVM) and membership in the Honors College. To build her research skills and enhance her eligibility before applying to medical school, she is working in San Francisco, Calif. as a research assistant at GABAeron, Inc. Her charge is to contribute to therapies to rescue the phenotypes associated with neurodegenerative and neurodevelopmental disorders, such as Alzheimer’s.

She received numerous awards as an undergraduate and was an inaugural recipient of the Key into Public Service Scholar award from Phi Beta Kappa, the oldest American national honorary. That scholarship is designed to connect promising liberal arts and sciences students with opportunities in public service. It helped to pay for her senior year of college.

Throughout her baccalaureate program she supplemented her academic pursuits with a wealth of volunteer and service accomplishments. She was on the Student Health Advisory Committee; identified food and housing insecurity challenges on all of WSU’s campuses as a member of the Basic Needs Assessment Task Force; and sponsored resolutions on college affordability and access to mental health care as an elected CVM senator on the Associated Students of Washington State University undergraduate student government. She also volunteered more than 40 hours each week at a Spokane, Wash. adult-family home.

Shola-Dare said her Nigerian family inspired her to help others and strive for academic excellence. She decided to become a physician and brain researcher after witnessing the medical and social challenges suffered by her late brother Shemi, an epileptic. He and her family experienced discrimination in their community of Akure in the province of Ondo, and she determined to help fellow Nigerian citizens become more knowledgeable and understanding of diseases. She researched in the lab of Jason R. Gerstner, research assistant professor at the WSU Spokane health-sciences campus, investigating sleep behavior and pharmacological rescue of sleep abnormalities in fruit-fly models of neurodegenerative diseases. She also worked in the neuroscience lab of Gary Wayman, associate professor, investigating the role of endogenous leptin on activity-dependent dendritic and synaptic growth in the hippocampus of mouse brains.

“The way I envisioned my future before WSU definitely changed,” Shola-Dare said. “I never would have thought I’d have all the great experiences I’ve had at WSU.

“Applying for the Rhodes has given me a clear vision of what I want to be. My interests are more defined. I’ve taken steps to get there. I encourage others to always think about how to impact change on their community in a sustainable way.”

Read more about Shola-Dare and the nearly 325 additional WSU students and alumni associated with prestigious and highly competitive awards.